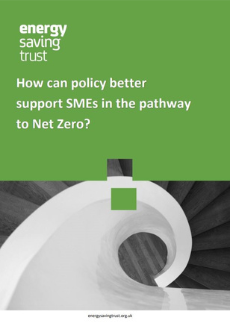 The Open University has contributed to a new report, ‘How can policy better support SMEs in the pathway to Net Zero?’, for the UK’s Climate Change Committee (CCC).

Richard Blundel, Professor of Enterprise and Organisation, was part of a multidisciplinary team led by the Energy Saving Trust, along with Dr Sam Hampton (University of Oxford) and Purple Market Research. The team interviewed small and medium-sized enterprise (SME) owners and managers, plus specialists from selected industry sectors, reviewed existing policies and proposed a series of novel approaches.

The CCC advises the UK and devolved governments on emissions targets, and reports to Parliament on progress made in reducing greenhouse gas emissions and preparing for and adapting to the impacts of climate change. This is the first study that the CCC has commissioned which is focused specifically on policies to promote decarbonisation in SMEs. It was commissioned to inform upcoming reporting on the role of business in a Net Zero UK, due for publication later this year.