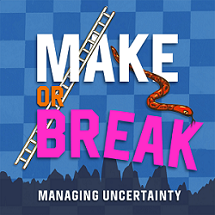 In life, facing tough decisions is always a possibility but in business, it’s only a matter of time. Anyone interested in business leadership can listen to ‘Make or Break’, an OU-sponsored podcast series from Auddy which features a dozen fantastic guests.

OU honorary graduate Justine Roberts of MumsNet talks about her journey in episode 10. She was made a joint honorary Doctor of the University (DUniv), along with co-founder Carrie Longton, in 2016 for their ‘exceptionally innovative and socially responsible business developments’ in founding the popular website.

The ‘Make or Break’ podcast is hosted by journalist Owen Bennett-Jones who has spent the last three decades interviewing some of the world’s most successful people. Owen talks to a wide range of inspiring business leaders who reached a critical point in their careers and took a leap of faith. By discussing these defining moments, he discovers their most valuable lessons and how that single decision shaped the course of their lives.

As well as the co-founder of MumsNet, other recent additions are Jakob Askou Bøss (Senior Vice-President of Corporate Strategy at the Ørsted energy company) and Dr Ekaterina Malievskaia (the co-founder and chief innovation officer of COMPASS Pathways, developing a drug called psilocybin to help people with treatment-resistant depression).

Listeners are being encouraged to enrol on one of OUBS’ suite of microcredentials, Management of Uncertainty: Leadership, Decisions and Action, which has Professor Mark Fenton-O’Creevy and Dr Layla Branicki as its lead educators. The course has its second presentation starting in October and is open for enrolment now.

Download ‘Make or Break’ on Apple, Spotify and Global.

Student Hub Live: Lost in translation: Navigating the challenges of communicating in a globally connected world