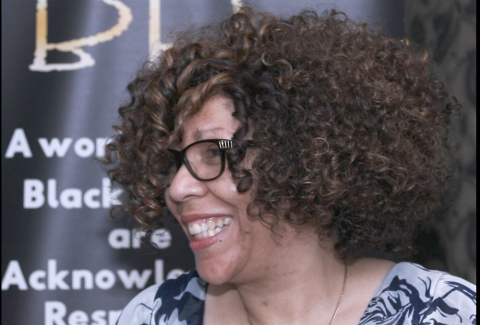 An academic from The Open University’s Business School has just learned she is to receive an OBE for her work promoting Black history and heritage.

Joyce Fraser (Joyce King to her OU colleagues) founded the Black Heroes Foundation in memory of her late husband ‘Flip’ Fraser, the first editor of The Voice newspaper (a publication aimed at a Black audience).

The London-based lecturer said it was a total shock when she found out she had been listed in the Queen’s Jubilee Birthday Honours list to become an officer of the Order of the British Empire.

I didn’t believe it until I got the letter of confirmation. But what an honour. I live in this country and my ancestors have given life and blood to make this country what it is. I am part of this history. My parents would have been so proud.

Husband Flip, AKA Peter Randolph Fraser, who died in 2014, was born in Kingston, Jamaica before coming to the UK as a teenager. He went on to become a theatrical producer and director and creator of the acclaimed iconic theatrical production Black Heroes in the Hall of Fame and championed Black musicians. Joyce said:

“I’m delighted to be honoured in this way. This honour is not just for me, but also for the whole Black community. It is a great way to honour the legacy of my late husband, ‘Flip’ Fraser, who was in the process of setting up the Black Heroes Foundation when he became ill and sadly passed away in 2014.”

“I’m hoping the exposure that comes with being awarded an OBE will highlight the work we do developing talent and artistic initiatives in the community that focus on youth, education, training, social up-lifting and personal development.”

The Black Heroes Foundation is a community-based charity that promotes talent together with cultural and artistic initiatives in the community. It focuses on youth, education, training, social uplifting and personal development programmes. Joyce is living and breathing its cultural initiatives. On Saturday 25 June she saw a play which she co-wrote come to the stage at London’s Battersea Arts Centre in celebration of Windrush Day and as part of the Wandsworth Art Fringe festival.

Play charts story of Claudia, who launched the precursor to Notting Hill Carnival

The play, ‘The story of Claudia Jones,’ is about Claudia’s work. She was active in ‘National Women’s Movements,’ such as Congress of American Women; National Council of Negro Women and toured 43 states in connection with full equality and equal rights for women.

Claudia was arrested three times during the McCarthy era anti-communist witch-hunts, eventually serving nine months in prison in 1955. Shortly after her release, she was deported to Britain. In Britain, she continued her struggles against racism.

She played a leading role in the West Indian community, despite the ill health she suffered. She founded Britain’s first major black newspaper the West Indian Gazette. She launched the first West Indian Carnival at St Pancras Town Hall in1959.  The precursor to the Notting Hill Carnival, a lasting legacy which is an annual showcase for Caribbean talent.