What’s wrong with talking about the menopause? 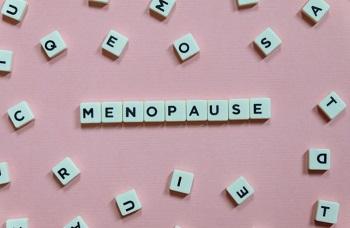 An OU academic is highlighting the difficulties working women encounter on World Menopause Day since many must live with debilitating symptoms impacting their performance at work.

“The change”, as it was quaintly referred to by a whispering post-war generation, was seldom talked about in the workplace. Although that’s all changing, there’s still more to be done, says Professor Jo Brewis.

Her message is: keep talking. Aloud. World Menopause Day is staged annually on 18 October to raise awareness of this reproductive life stage and support ways to improve health and well-being.

Jo, Professor of People and Organisations at the OU, has become a champion for working women experiencing the menopause. She co-authored a Government report on Menopause transition: the effects on women’s economic participation, and points to another that says women over 50 are amongst the fastest growing segments of the workplace. (1)

Yet she says a recent academic study of women in the same age bracket found they were more likely to reduce their working hours because of their symptoms, or leave the workplace altogether. (2)

Jo has spent the past five years highlighting the struggles of menopausal women, especially those in the workplace. She wants employers to reflect on what they could do to make the working lives of these women better.

I want to see menopause as part of the everyday workplace conversation; no more embarrassing, no more bizarre than somebody saying, ‘Oh, great news, I’m having a baby.’

In the workplace, talking about maternity leave, and when people might come back to work after having a baby is normal; talking about menopause still isn’t.

We have to remove the taboo by addressing it and normalising it; taking away the fear and busting the myths as well, because with fear comes myth-making.

She says there is anecdotal evidence from her international peers that UK employers are leading the way. She says any employer can make simple, affordable adjustments in the workplace to help women.

Those adjustments include providing a USB fan for their desk, or ensuring female employees affected sit near a window they can open to gain relief from at least one of the symptoms: hot flushes.

Meanwhile, many already are making a difference. Jo sits on an independent judging panel for Menopause Friendly Accreditation, supported by Henpicked: Menopause in the Workplace, which is seeing more and more leadership teams seeking the benchmark.

Women in board rooms and factory floors alike are dealing with menopause symptoms with a stiff upper lip. They are working harder to not be seen to be losing their footing and, for some, that gets beyond possible to continue.