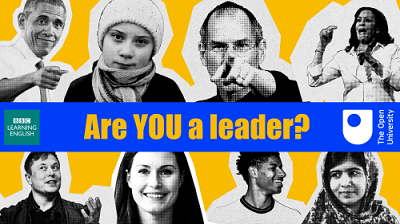 Academics from The Open University have collaborated with BBC Learning English to help thousands of people around the world to not only learn English but inform and inspire them about leadership.

A new 20-part series is available now through the BBC’s Learning English and it explores the differing leadership approaches including that of household names such as Apple’s Steve Jobs, climate-change activist Greta Thunberg and former US president Donald Trump.

It spotlights professional footballer Marcus Rashford, who used his celebrity to successfully lobby the UK government to provide meals for impoverished school children during Covid lockdowns, plus many other leaders.

The series explores the unexpected power of the ordinary man or woman and the strength of community-led leadership in a world that has seen dramatic developments in recent times.

It also looks at whether leadership is best done by women – challenging the concept of male-only leaders – and short videos show interviews with academics and influencers to shed some light on methods of leadership and why some are better than others.

Together, they give a fascinating insight into the different aspects of leadership such as the ‘quiet’ leadership of Anthony Fauci, chief medical advisor to the President of the United States, and the darker side in the form of cult leaders.

It also touches on ‘good followers’ such as Kamala Harris’, US vice president to Joe Biden, and what it was like following Sun Myung Moon, leader of the Moonies, also known as the Unification Church.

We hear the first-hand experience of Steven Hassan who was recruited into the Moonies as a 19-year-old for about two years. He’s now a mental-health counsellor, cult expert and author.

Once again we teamed up with The Open University to deliver content from which learners of English can benefit in so many more ways than just honing their language skills.

We want our audience to learn while being informed and inspired, and our new series about leadership fits this bill perfectly, engaging the audience in an engaging quest.

We are delighted to once again be partnering with BBC Learning English and to have had the opportunity to work on exploring Leadership.

The Leadership series is funded by The Open University. The three academics from the OU’s Faculty of Business and Law who were involved in the project include Dr Daniel Haslam, Dr Francesca Calo both lecturers in management and Dr Owain Smolovic-Jones, senior lecturer in People Management and Organisation.

BBC Learning English is a world leader in using international broadcasting to teach English. Part of the BBC World Service, BBC Learning English connects with its audiences via the website, bbclearningenglish.com , YouTube, Facebook, Instagram, Twitter and Viber, and podcasts such as The English We Speak and 6 Minute English.

The faculty was also involved in a previous series with BBC Learning English about international law.