Post-COP26, The Open University hears from its week two Observers 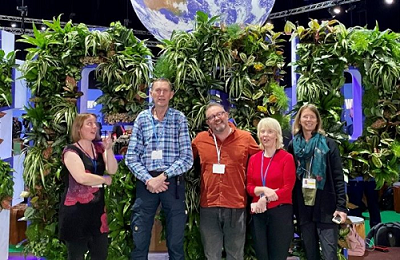 COP26 brought together parties from across the world to accelerate action towards the goals of the Paris Agreement and the UN Framework Convention on Climate Change.

The two weeks of negotiations resulted in the Glasgow Climate Pact, which the UN Secretary General says is ‘far from enough’ and advises that ‘every country, every city, every company, every financial institution must radically, credibly and verifiably reduce their emissions and decarbonize their portfolios, starting now’.

The Open University had official observer status at COP26 and has taken learnings from the conference to inform the university’s wider sustainability mission and inspire students and staff to take action.

Here’s a look at some of the conference’s week two highlights, as told by some of our Open University observers:

David Edwards, Associate Lecturer, Faculty of Science, Technology, Engineering and Maths: “It has been quite an experience to be an Observer at such a large conference bringing together so many disparate voices. My head is buzzing with so many interesting and impassioned perspectives – I’ll be reflecting on this for years to come. Today, the EU negotiator spoke powerfully, making climate change personal by relating it to his grandson’s future – climate change is personal to all of us!”

Rosalie Faithfull, Team Assistant, Faculty of Arts and Social Sciences: “I think the highlight of my week was when I was able to ‘parade’ through the blue zone with my fellow observers demanding climate justice and then outside where I was able to join some of my friends on the street. I’m very glad the UN Constituencies were willing to work with the COP26 Coalition on organising this – I think it went a long way at breaking down barriers between the worlds inside and outside the COP and in that way was a demonstration of true democracy.”

Sabine Gundel, Associate Lecturer, Faculty of Arts and Social Sciences: “The most important thing for me was experiencing and being able to participate in a rising global justice movement which formed outside and inside the COP26. People power and global solidarity will be needed to move forward from words and pledges to climate action. The march out of the COP26 by thousands of COP observers should be recognised as a significant statement against the lack of significant progress.”

Gillian Mawdsley, Associate Lecturer, Faculty of Business and Law: “COP26 – size, passion, commitment, conflict, complexity, diversity, narrative, and repetition. Our message to action is: How do we make a difference personally, professionally, academically and globally and add value and delivery to the need to change as the Glasgow Agreement once reached.”

Stephen Peake, Professor of Climate Change and Energy, Faculty of Science, Technology, Engineering and Maths: “My highlight of the week is the UN Secretary General Antonio Guterres’ remarks to the Global Climate Action High-Level Event on November 11th. A rare and stunning, authentic piece of diplomacy.”

The Open University is committed to being ‘net zero’ by 2050 and will achieve net zero for what are known as scope 1 and 2 emissions by 2030, investing millions of pounds to achieve this. The University has also committed to divestment from fossil fuels, on which work has started and will complete by 2023.

As part of its commitment to climate change, the Open University has just launched a new microcredential – Climate Change: Transforming your Organisation for Sustainability. Delivered on FutureLearn, this microcredential will equip learners with the knowledge, skills, and courage to transform their organisation’s response to the climate and ecological crisis, whatever their level, role or sector, and wherever they are in the world.

Read more about the Open University Observers’ time at COP26.