The awards were presented by Professor Rebecca Taylor, Dean of the OU Business School. She said: “As the highest achievers in their graduating year, our student and alumni winners are all exceptional individuals. Their outstanding abilities are reflected in their academic accomplishments and successes in the workplace.”

Student of the year awards

Studying with OUBS was a natural choice for Michael as he had been a student at the OU since 1992/1993 and has worked with the university since 1998. Encouragement from colleagues led to his decision to take an MBA. 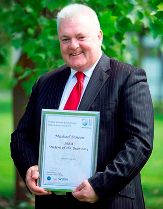 When I became a manager in 1999, I took the OUBS Certificate in Management, which was very useful in my work. Colleagues suggested that I should complete the MBA but at that stage, it wasn’t something I gave significant thought to. Later, I took a couple of postgraduate technology modules, which counted as electives towards the MBA, so with some encouragement from my staff tutor, I decided it was time to dive in and complete the MBA.

A research scientist, with both undergraduate and postgraduate scientific qualifications, Emily works in the field of reproductive technology, developing products and services for IVF clinics around the world. Having held a commercial scientific position for the past ten years, she wanted to learn more about business and to have a qualification that would give credibility to her knowledge. 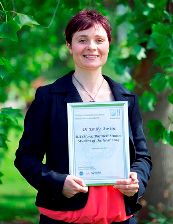 Working in business, I use ideas and concepts all the time. I have learnt to never stop learning. I don’t know if I will gain any more business qualifications but my ears and eyes are always open to pick up new ideas and approaches. It has also given me confidence and I hope to be moving up the career ladder.

A civil servant since 1998, James is responsible for heading an initiative to merge the two largest operational areas within the organisation. As a trained facilitator and qualified coach, he has the additional responsibility of overseeing a Coaching Network. Having developed a passion for learning, James has enrolled to start an MBA in November 2015. 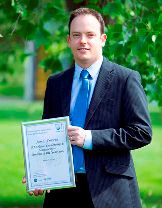 The practice based approach to learning has equipped me with a managerial ‘toolbox’ of concepts, theories and practical skills, which enable me to view organisations from a wider range of perspectives. Studying has certainly improved my performance as a manager and enriched my approach and practice.

Professional Certificate in Management Student of the Year - Emma Nasta

Having been a manager for several years, Emma wanted a better understanding of her role and more insight into the people she manages. Inspired by her success, she is now seriously considering taking an MBA. 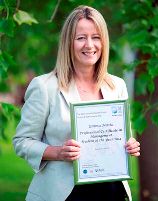 The course has made me more confident in leading and managing projects through to implementation, problem solving and making changes that I wouldn’t have done before. I am also more forthright and confident in my personal life; having never studied at this level before I was unsure of what I could achieve but it has taught me to believe in myself!

Also awarded but unable to attend the celebration:

Alumni of the year awards

Jeremy gained an MBA in 2000. He was nominated by fellow alumni for his dedicated work with Grow Movement, developing a successful entrepreneur programme with businesses in Africa. 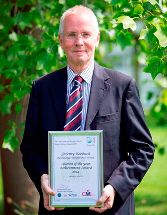 Having gone straight into the workplace from school, after a few years it was clear that I was approaching a ceiling beyond which it would be difficult to progress without further qualifications. The OU means so much to me because of the way that studying with the organisation changed my life. Every role I’ve had since 2000 has only been possible because of my MBA.

Luke was nominated by fellow alumni for his work in scientific research. In 2002, realising that his research into a small and harmless insect called Drosophila, could be used to control insects such as mosquitoes and agricultural pests, Luke founded Oxitec Ltd. The company is helping governments and communities keep people healthy and increase food production in a way that is sustainable, environmentally sound and cost effective. 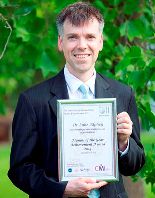 I undertook an MBA to better understand the cultural issues and to equip myself with additional management tools and options. It has helped me to train my managers; recruit and develop staff; guide the development of corporate culture; instil commercial understanding and drive; and develop a quality culture appropriate to customer expectations and the regulated and high-profile nature of the technology.

Manfred was nominated by fellow alumni for his work in promoting and developing OUBS alumni communities in Germany and Luxembourg. 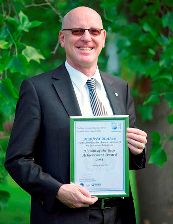 I always wanted to study for an MBA because I knew it would give me the best business education possible. It has given me career options that I wouldn’t have even thought about before. I was able to implement much of what I was learning into my daily work life straight away.

Two Highly Commended awards were also given to:

An MBA graduate, Laura was nominated for her work helping to combat loneliness and isolation for people in later life. Recruited as the first director of The Campaign to End Loneliness in 2010, with the support of five partner organisations she has been at the forefront of raising the profile of this issue.

An MBA makes a huge difference to the way you work. I wouldn’t be leading a national charity campaign without it. I’ve applied my learning in three main areas: decision making; stakeholder management; and self-management. My MBA has transformed the way I approach any situation and relationship.

As my career has progressed I have found that I’m less and less reliant upon my technical background and increasingly focussed on the managerial aspects of my role. Studying for the MBA allowed me to blend the theory and practice of management, learn the latest techniques and apply them to my work. This has in turn allowed me to develop as a manager and progress my career.