Highlights from week one of COP26, as told by the Open University observers 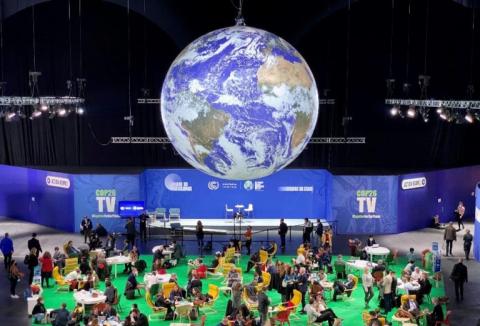 COP26 has been bringing together parties from across the world to accelerate action towards the goals of the Paris Agreement and the UN Framework Convention on Climate Change.

The event started on Sunday and runs through to 12 November, described as the ‘last hope’ for humanity to avoid climate change devastation.

More than 80 universities and research institutes from across the UK have joined together as a COP26 Universities Network  to showcase their research addressing climate change.

The Open University has official observer status at COP26 and is learning from the conference to inform the university’s wider sustainability mission and inspire students and staff to take action.

Here’s a look at some of the conference’s week one highlights, as told by some of our Open University observers:

Dr Leslie Mabon, Lecturer in Engineering and Innovation: "My highlight from the first week has been seeing all the high-level announcements from countries working together to end coal and prevent deforestation. There’s a long way to go yet, but it shows the spirit of cooperation is there."

Graeme Smith, Team Leader, Open University in Scotland: “A highlight for me has been the smaller, more informal events where there is much more of a desire to think about climate-based action and solutions outside of existing economic and power structures, rather than through the prism of the failing methodology being used at the moment.”

Dr Kate Symons, Lecturer in Global Development: “My highlight has been meeting colleagues with shared research interests and growing my understanding of different approaches to nature-based solutions. In particular it has been great to learn from critical perspectives which prioritise fair and bottom-up approaches and the rights of local and Indigenous Peoples.”

Stephen Peake, Professor of Climate Change and Energy: “My week one highlight is the Glasgow Financial Alliance for Net Zero (GFANZ) which is a coalition of the world’s biggest financial institutions that collectively control $130 trillion. A total game changer that is coming to every wallet, bank account, pension, insurance policy of those humans lucky enough to have those things.”

Dr Clive Mitchell, Associate Lecturer, STEM: “It’s been great to see the commitments to early phasing out of coal by 2030 for developed countries and 2045 for others, with both words and cash to support a just transition. It’s a herculean task to get out of coal and boost renewable energy, including enabling infrastructure and supporting communities at the sharp end.”

The Open University is committed to being ‘net zero’ by 2050 and will achieve net zero for what are known as scope 1 and 2 emissions by 2030, investing millions of pounds to achieve this. The University has also committed to divestment from fossil fuels, on which work has started and will complete by 2023.