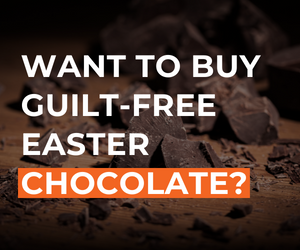 What do Beyond Good, Alter Eco, Tony’s Chocolonely and Whittaker’s all have in common? Besides producing delicious chocolate, they are the “good eggs” in this year’s chocolate scorecard.

Each is an industry leader in producing sustainable chocolate. By “sustainable” we mean doing the right thing to the planet and its people on measures as important as child labour, pesticide use, and deforestation.

The Chocolate Collective, made up of Australian charity Be Slavery Free and 20 other non-government organisations, with guidance from university experts and consultants, grades 90% of the industry and publishes the results in the lead-up to Easter, the biggest chocolate season of the year.

How we determine what’s a ‘good egg’

We scored 38 companies on six measures:

Transparency and traceability. This is the big one. If companies don’t know where their cocoa comes from, they cannot truly ensure it isn’t tainted by child labour, deforestation, and other abuses.

Child labour. More than 1.56 million children work in the cocoa industry. Around 95% of them are exposed to at least one type of hazardous labour as defined by the International Labour Organization.

Living income. Farmers are poor because of a combination of small farm size, low productivity, high costs, low prices and no alternative sources of income. Most earn about half of a so-called living income, able to provide enough food, water, housing, education, healthcare and provisions for unexpected events.

Deforestation and climate. In 2020 alone, more than 47,000 hectares of forest was lost in the cocoa growing areas of Côte d'Ivoire. We explored how companies are minimising their contribution to deforestation through programs such as satellite monitoring their plans to reach net-zero carbon emissions.

Agroforestry. As opposed to pesticide-soaked monoculture, this is a more ecologically sound way of growing cocoa and restoring farm landscapes. We also looked at assessment, monitoring, and support to farmers using such methods. While we saw improvements, greater coordinated action is needed.

Agrichemicals. This theme is appearing in the chocolate scorecard for the first time. Overall, companies scored poorly, with many still uncommitted to action to reduce agrichemicals and failing to adequately protect farmers (especially children and pregnant women) from being poisoned.

And the winners are… 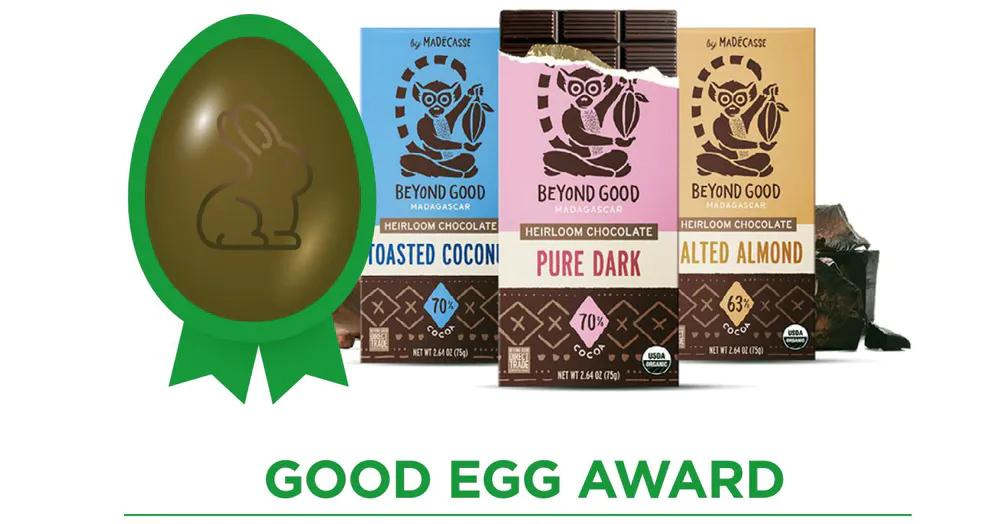 Beyond Good receives this year’s “good egg” award for a business model which ensures people and the planet are respected and cared for. Its smaller size has enabled this model to be refined, and now it is looking to scale up.

Also Nestlé receives an honourable mention for its huge steps to address the living incomes of farmers, and for its commitment to plant 20 million shade trees each year.

Finally, Ferrero now joins other companies whose cocoa is 100% or early 100% certified slavery-free, such as Hershey’s, Unilever, Ritter.

We also want to give a shout out to the best Japanese company, Blommer/Fuji. This company has made major improvements over the past year and did particularly well in some aspects of addressing child labour and agrforestry. 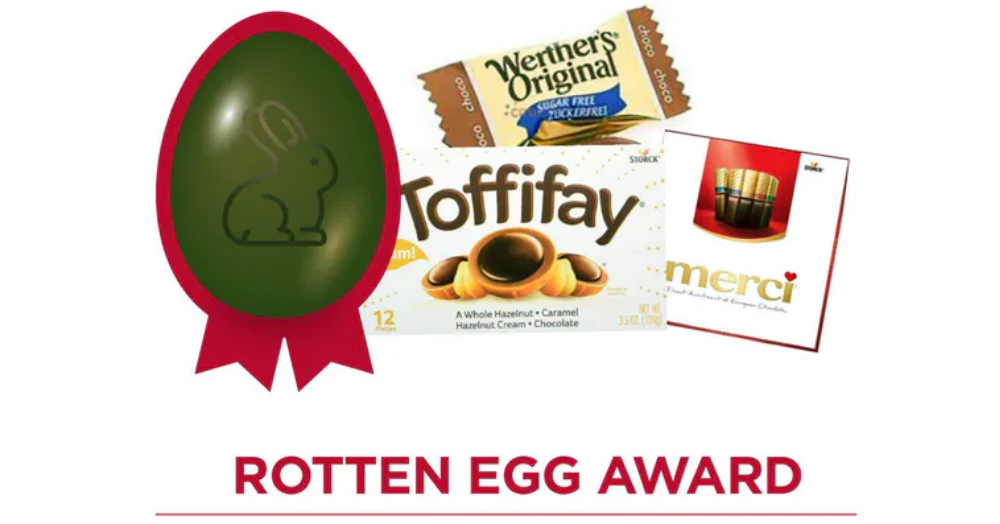 “Rotten eggs” were awarded to Starbucks, General Mills, and Storck who did not disclose to us any improvements in their cocoa value chain.

Their online sustainability reports lack the details and transparency many other companies provide to their stakeholders, or are simply out of date.

If they are making progress on increasing the sustainability of their chocolate supply chains, then we (and presumably their customers) would like to hear more about it. There might be improvement, but they are not telling.

What you do makes a difference

The chocolate industry is laced with unsustainable practices. The farmers are extremely poor, and sustainability often takes second place to cheap cocoa. Our scorecard can help.

Also, it helps to look out for products that are 100% organic. You might pay a little more, but you can enjoy your chocolate knowing that in itself protects the lives of farmers, children and the environment.

There’s plenty of room for improvement across the industry – if there’s enough consumer demand for change. For instance, the manufacturers of Cadbury and Lindt chocolate were not among the top band of good eggs, instead only scoring a “Starting to implement good policies”.

Australians might be asking about local brands such as Darrell Lea, Haigh’s and Robern Menz. They are not big enough to be scored in the global scorecard, but the good news is each is taking sizeable steps. Ask them if you want to know more. 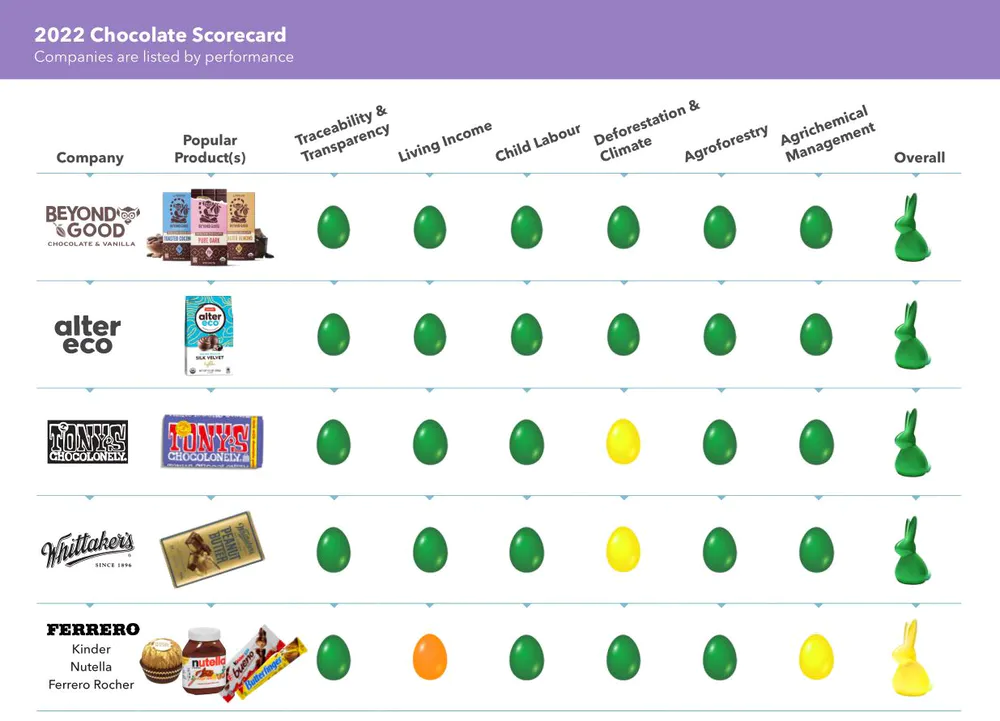 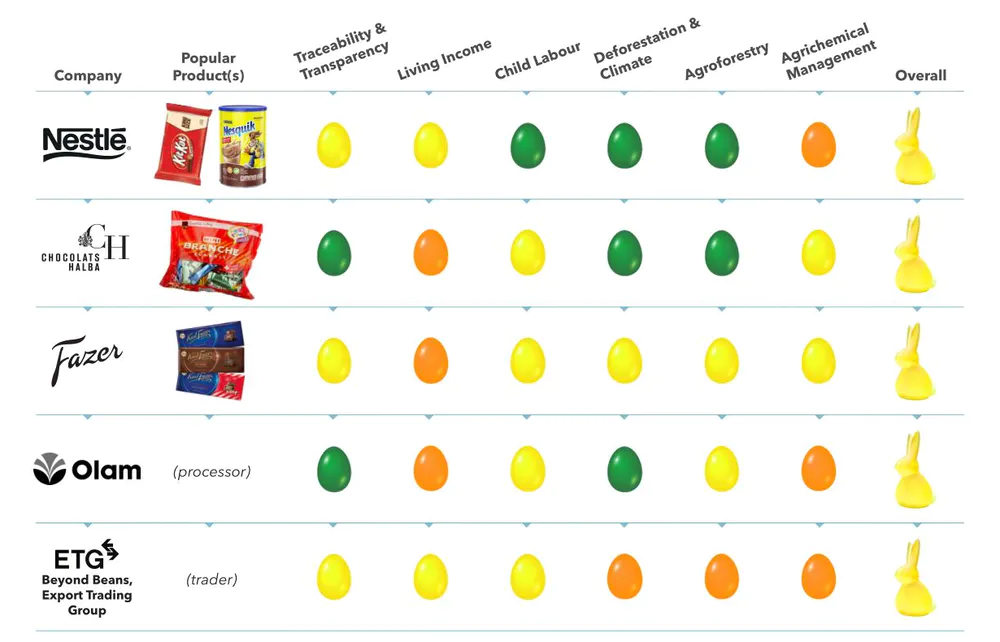 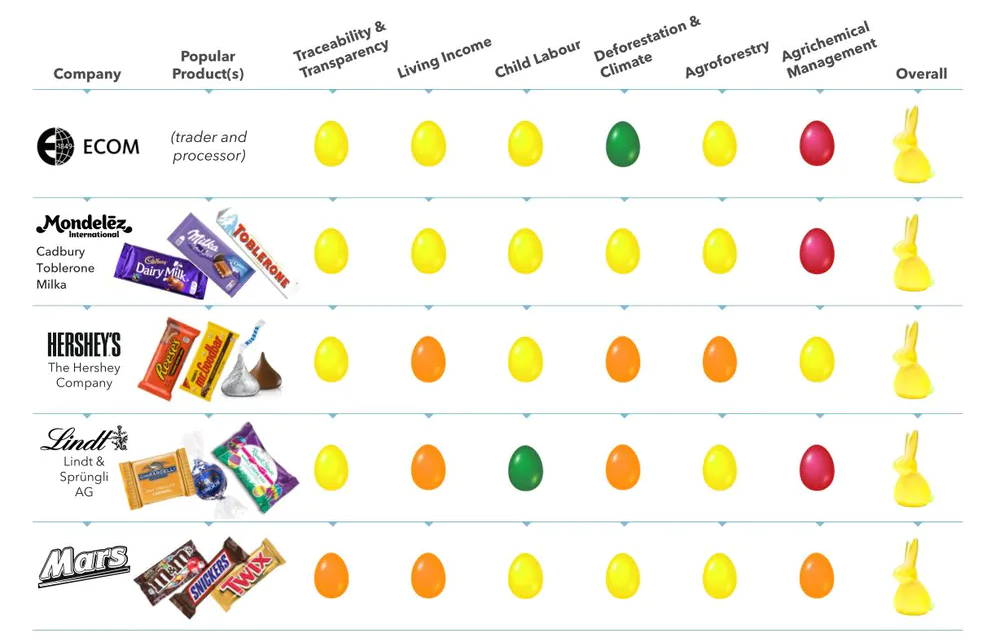 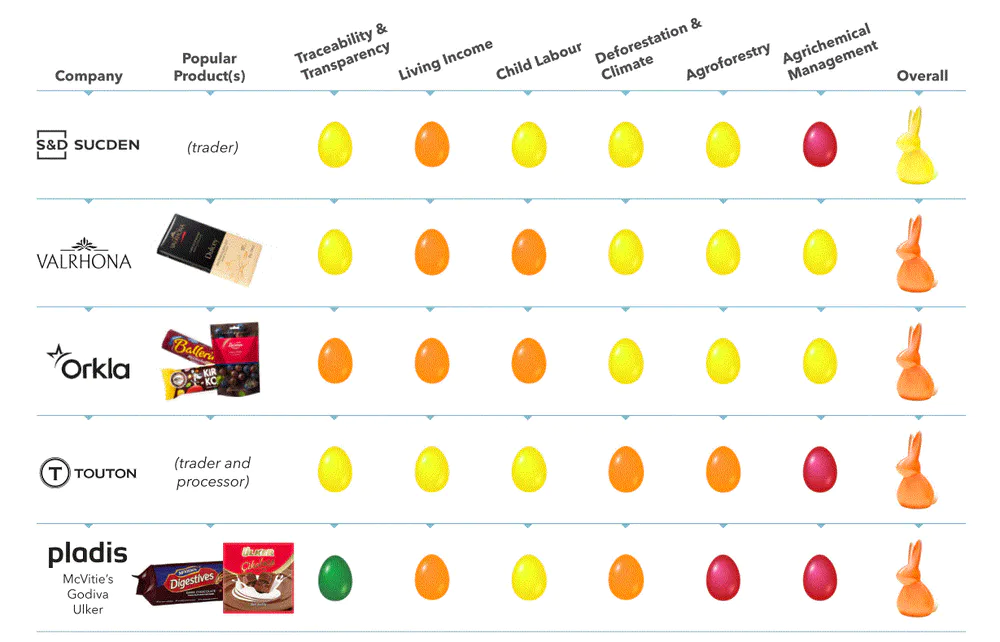 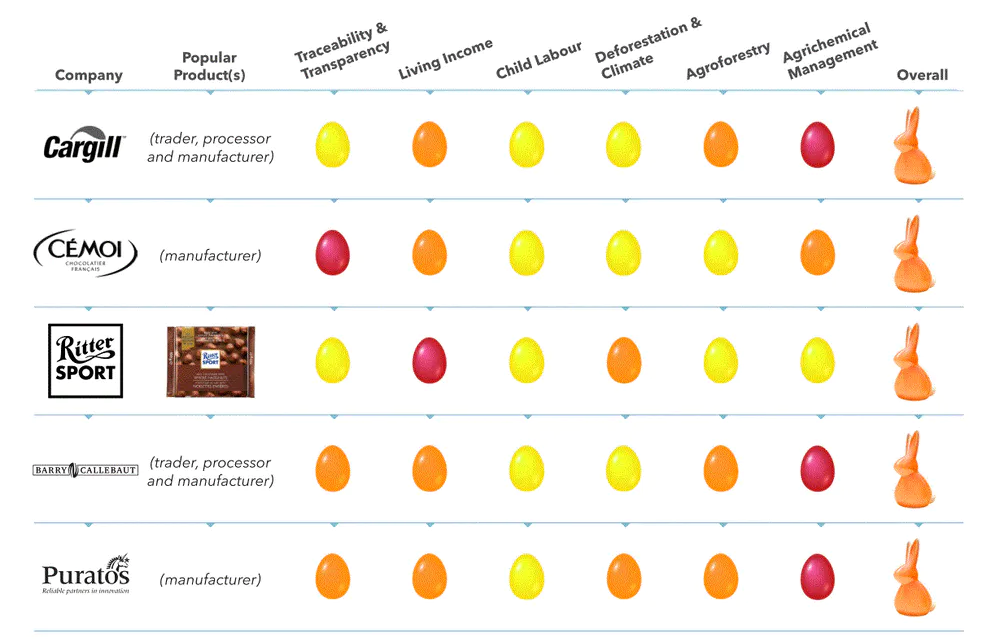 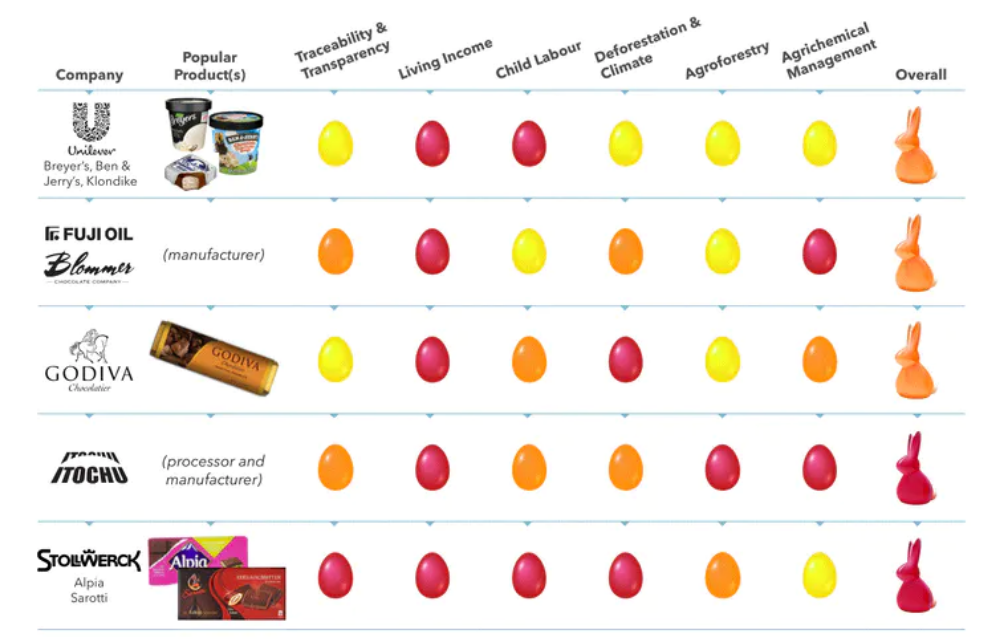 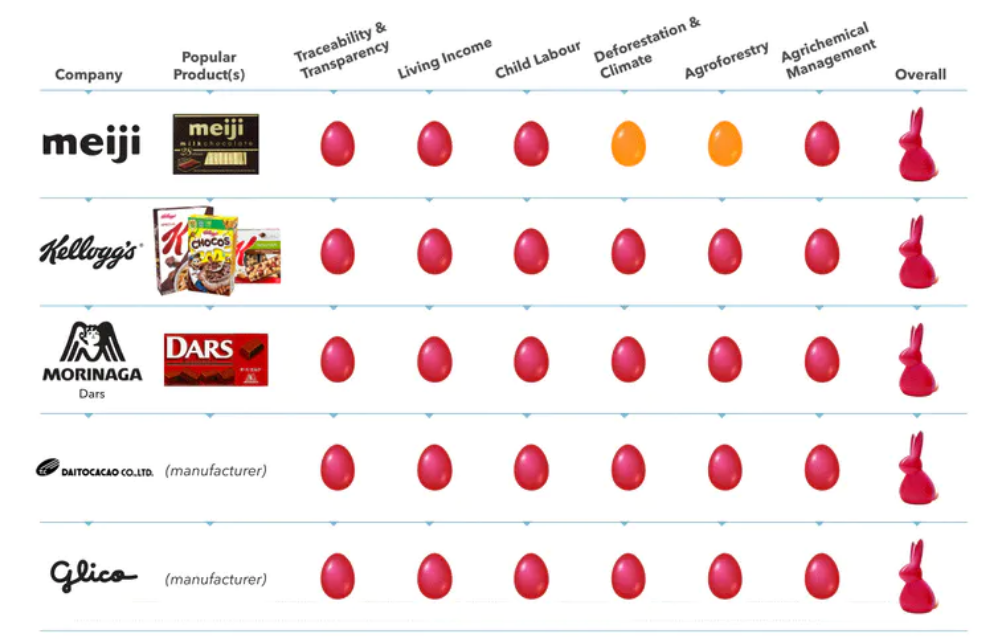 This article was co-authored by Cristiana Bernardi, Senior Lecturer in Accounting and Financial Management, The Open University Business School.