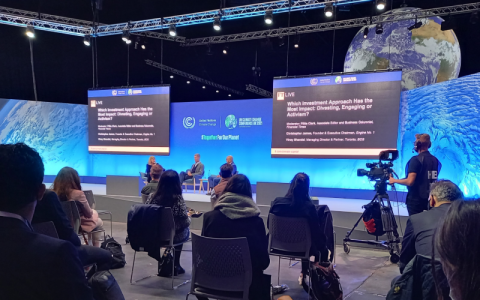 COP26 has been bringing together parties from across the world to accelerate action towards the goals of the Paris Agreement and the UN Framework Convention on Climate Change. The Open University has official observer status at COP26 and is learning from the conference to inform the university’s wider sustainability mission and inspire students and staff to take action.

Today's (3 November) focus on Delivering Finance for Emerging and Developing Markets took the form of two panel discussions, plus announcements from the UK Chancellor, Rishi Sunak, and US Treasury Secretary, Janet Yellen.

Setting the scene, the Indonesian Minister of Finance, Sri Mulyani called for $280bn annually for Indonesia alone. Donors, hosted by Mark Carney, UN Special Envoy for Climate Action and Finance and Prime Minister Johnson's Climate Finance Advisor for COP26, acknowledged that finance to developing countries is essential and needs to be increased from $100bn a year to $1tn. The Glasgow Financial Alliance for Net Zero (GFANZ) aims to limit global temperature increases to 1.5°C from pre-industrial levels through a whole economy transition. It represents institutions controlling $130tn of assets (40% of the global total).

Recipients, represented by Uruguay, the World Bank and the EU Bank for Reconstruction and Development (a multilateral development bank), argue that finance is not only needed to cover technologies to transition to net zero emissions, but also to cover loss and damage and adaptation to a changing climate. For some countries loss and damage is from 2-9% GDP annually – more frequently at the higher end and rising each year. The full supply chain needs to be considered from global finance through to local lending markets and stable macro-economic conditions. However much money is available, it won't help if it adds to existing debts.

For most countries, the transition to net zero is both social and environmental. For example, in South Africa which relies on coal for 88% of its energy needs, each person employed in coal supports a further 3-10 people. The cost of capital (borrowing) should be linked to Nationally Determined Contributions (NDCs), with lower rates for more ambitious performance on decarbonisation pathways and environmental integrity. Internationally agreed standards are required for both environmental and sustainability disclosures. Transitions must be just.

It's only outside COP26, on the streets of Glasgow, that you will hear the deeper counter arguments on whether the climate-nature crisis can be solved by the capitalist economic model that created it.

Visit The Open University's Sustainability page to find more diary entries from COP26 and more about the OU's commitment to sustainable practices.