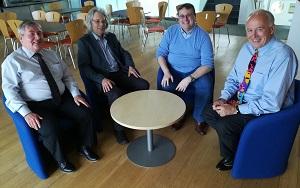 On first glance, what does The Open University’s success in winning a £6.7 million grant from Research England to expand its Astrobiology Research Group have to do with the Business School or Law School?

This major three-year project starting in December 2019, led by Dr Karen Olsson-Francis, a Senior Lecturer in the STEM faculty, aims to help address fundamental questions about life beyond the Earth.

With the treaty that forms the basis of international space law, the Outer Space Treaty, having been created way back in 1967 by the US, the UK and the then Soviet Union, there is definitely scope for research in this area!

As the Outer Space Treaty pre-dates both the Moon landings and the creation of the OU – both cosmic events! – and in a time of renewed interest in space exploration through the likes of Elon Musk and Richard Branson, this is a great time to ask ‘are we alone in the universe?’ There is no space police but the law still applies and it’s fascinating to pose questions such as ‘is there a need for a Court of Arbitration for Space?’

Having previously touched on the issues of space law at an internal research festival in 2017, the OU’s Citizenship and Governance SRA (strategic research area) then held a symposium, Reflecting Space, in February 2018. This think-tank drew Karen and other colleagues from the space sciences into our orbit, so to speak! Since then, Les Budd from the Business School and OU colleague Manish Patel have also combined to secure a major opportunity with the European Space Agency (ESA), known as BEERS or the Benefits of the ESA Exploration Roadmap in Socioeconomics.

Many thanks go to all who have supported our exploration of an idea, working with the OU’s astrobiology researchers and the International Development Office, which seemed to others to be out of this world .

Chris Newman from Northumbria University, a former police detective who has since become the leading UK expert in space law and policy, will become the OU’s new Visiting Professor of Space Law having first been introduced to the OU via the Reflecting Space symposium. This was by an existing Visiting Professor, Eddie Abbott-Halpin, now Principal of Orkney College and a Professor of the University of the Highlands and Islands. Another symposium attendee who will be involved is ‘space-tracker’ Ralph ‘Dinz’ Dinsley, a UK expert on tracking military or commercial space debris who is recently retired from the RAF.

The space governance network hasn’t changed since 1967 and with new technology democratising access to space, there’s been a dramatic fall in the cost of getting up there. I’m intrigued by questions relating to deep space exploration such as how will we manage things if the Moon or Mars are colonised; for example, what happens to our human rubbish or where we bury our dead? As well as the scientific and engineering problems of space exploration, there’s also a need to think about the legal issues and to make them a part of the underlying mission planning. The OU is the only institution I would collaborate with; this is a great cross and multi-disciplinary project and it’s the way to go in my opinion.

The 1967 Treaty is no longer fit for purpose. With the fourth industrial revolution on the horizon and a lot more space launch capability, I’m interested in the human rights elements of technology. Each of us has numerous interactions with satellites every day through our sat navs, cashpoints and other security measures. There’s also issues of the real societal impact of having lots more debris in space – who’s responsible for our space junk? There’s a need for governance to ensure ways we can be permissive but controlled with our space exploration.

A permanent lectureship in space governance and law is also being recruited, initially funded for the first three years by this Research England grant, together with two PhD studentships, one in the Law School (space governance) and one in the Business School (space economics). Dr Olsson-Francis and Professor Newman are holding a seminar for Business School and Law School staff on Tuesday 10 September in the Michael Young Building Presentation Room from 11:00 – 12:00.

Find out more about OU research in STEM subjects.