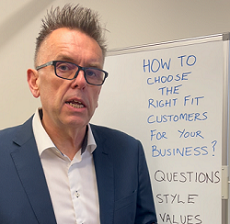 With more than 27,300 OU MBA alumni worldwide and rising, Des Bourne fondly remembers being named as our 10,000th MBA graduate 20 years ago.

Having left school at 16, Des from the West Midlands returned to study years later as he combined full-time work, family life and social commitments with his MBA. He had already achieved two promotions in four years when he graduated in July 2001. Responsible for 120 people as a divisional manager for a highways maintenance and service provision group, he said at the time of his graduation: “I would not be where I am now if it wasn’t for the MBA”.

This view is unchanged two decades on.

The qualification broadened my horizons and changed the course of my career. An MBA transformed how employers viewed my potential and put me on an equal footing in a business world that was dominated by executives and managers who had formal academic qualifications.

In FBL Perspectives, Des outlines in his own words how his studies have helped him throughout his career in the construction sector. This includes how he has fulfilled an entrepreneurial desire to start his own consultancy business.