Quality education and lifelong learning promoted at the Pan-Commonwealth Forum The Open University jointly hosted the ninth Pan-Commonwealth Forum on Open Learning (known as PCF9), together with the Commonwealth of Learning, at the historic Murrayfield Stadium in Edinburgh this week (9-12 September).

The Forum debated the future of education and learning as the OU (50 years) and the Commonwealth of Learning (30 years) celebrate their commitment to quality education and lifelong learning in 2019. The focus was on ‘quality education for all’, the fourth of 17 sustainable development goals agreed by the United Nations General Assembly in September 2015.

The President of the Republic of Seychelles, His Excellency Danny Faure, gave the opening address on the Monday morning in which he stated that technological opportunities need to be harnessed to create aspiration, access and achievement in the world, especially in Africa and India which both have a young population.

During the four-day event, leading authorities in open distance education such as Lord David Puttnam, the Commonwealth of Learning, and Sarah Brown addressed a host of practitioners. There were other speakers from open universities all over the world including the UK, India, Nigeria, Indonesia, Bangladesh, Botswana, Sri Lanka, South Africa, Finland and Mauritius. 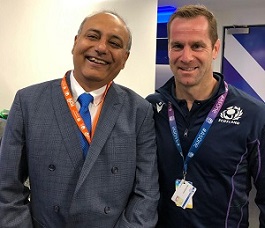 Dr Charles Mbalyohere presented on open and distance learning as a strategic tool for improving employability and entrepreneurship in new frontier markets. He was also able to promote the OU’s Open Impact Conference in Uganda in December to delegates.

Professor Jean Hartley and Dr Kristen Reid also both facilitated sessions – Jean joined by the Honourable Pia Philip (Minister of Education, Western Equatorial State, South Sudan) and using her experience of volunteering at the Ibba Girls’ School in South Sudan (which has a UK-based charity, Friends of Ibba Girls’ School), and Kristen on ‘Quality for Employability’.

Jon-Paul Knight, who manages the Law School’s Open Justice Centre, was on hand to answer queries from the more than 500 invited educational leaders and practitioners from 61 countries. He was joined by Astrid Alvarez, Senior Manager in the Stakeholder and Alumni Engagement team, on the OU exhibition stand.

Pictured above: Professor Dev Kodwani (centre) is flanked by the President of the Republic of Seychelles, His Excellency Danny Faure (left), and Professor John Domingue, Director of the OU’s Knowledge Media Institute (KMi), at the Pan-Commonwealth Forum at Murrayfield Stadium.

Click here to read more about the Pan-Commonwealth Forum.