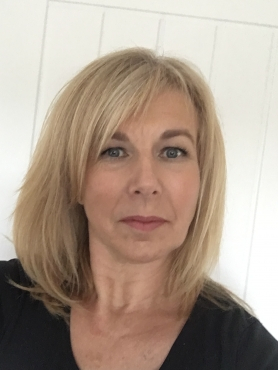 Linda is a Research Fellow at the Centre for Policing Research and Learning (CPRL) at the Open University. She is part of the CPRL team working on Bluestone 2, which builds on the high-profile pioneering pathfinder project, Operation Bluestone. Funded by the Home Office, this work focuses on creating a new methodology in policing, to explore barriers to the successful investigation of rape and serious sexual offences (RASSO). Linda’s role in Bluestone 2 is exploring Police Officer wellbeing in the context of RASSO.

Linda has a strong portfolio of work in the criminal justice system (CJS), particularly engagement with UK military and veteran networks, focusing on veterans in the CJS. Specialising in qualitative research methods, she has a solid track record of designing, undertaking, analysing and reporting on research projects within a policing context.

Her previous role as a Senior Research Fellow in the Veterans & Families Institute for Military Social Research (VFI) at Anglia Ruskin University explored initiatives to reduce recidivism among veteran offenders. She has led, or been part of, research and consultancy work to further understand the needs of Police Officers, case workers, veteran offenders and their families, in the context of veterans in the CJS. Linda has in-depth knowledge of the funding landscape for veteran research, with an extensive portfolio of income generation and publications, including two House of Commons Select Defence Committee Inquiries and a book chapter with NATO members. Linda was submitted to REF2021, Unit of Assessment 23, demonstrating significant research responsibility. She is lead author of the highly regarded VFI model of military-to-civilian transition.

Linda has worked on two nationwide CJS projects. Firstly, Project Nova, a support service for veterans in the CJS, who work in partnership with 19 Police forces across England. The work on Project Nova led to recommendations for the Police to consider more robust ways of gathering veteran information. Secondly, she led on a national audit of support for veterans in the CJS. The audit was undertaken in conjunction with HMPPS, to create a geographical map to chart the services available to veterans across the CJS continuum, from point of arrest to prison release. Her CJS work has resulted in numerous national and international academic journal articles and outputs, including an article in Policing Insight. She has given presentations at many conferences and has organised several large-scale impact events. Linda acts as a reviewer for international veteran and educational journals. Linda was lead author on the production of lay summaries for the Forces in Mind Trust Research Centre on military topics known as ‘Snapshots’, to enable academic writing to reach a non-academic and third sector audience.

Fossey, M., Cooper, L., and Raid, K., 2018. The impact of transition on families: the role of the family, support and recognition. In: Castro, C., Dursun, S., and Harrison, K. (Eds). The transition of military veterans from active service to military life (NATO publication). London: Elsevier.

Linda uses a narrative inquiry approach and her main research areas include wellbeing support for Police Officers, veterans in the CJS, exploring wellbeing for case workers, victims and offenders, understanding drivers of offending to reduce recidivism, point of arrest interventions, rehabilitation of offenders and restorative justice.

Linda has taught on PhD, DProf, EdD, MSc and MA researcher developer programmes. Linda has supervised at PhD level to completion and has chaired numerous viva voce examinations. Linda’s early research career was in Education. She was Course Leader and Senior Lecturer in BA Education and Childhood Studies at Anglia Ruskin University. Her first research post was a Research Assistant in the Faculty of Education, University of Cambridge. Her research profile includes a publication portfolio exploring access and barriers in primary and tertiary educational settings.

Linda has worked on several projects with practical and academic impact. The current research project Bluestone 2 is leading on from Project Bluestone, which is receiving high levels of media coverage and will continue to do so over 2021-2023 - this project has the opportunity to change the nature of police investigations of rape and sexual assault.

Linda’s work in the CJS has built exceptional working relationships, including collaborations with colleagues in the Police, Her Majesty’s Prison and Probation Service (HMPPS), the Ministry of Justice and the Ministry of Defence.

She is an Advisory Board member for the Student Veterans in Transition project, Aarhus University, Denmark (current) and for previous projects she has been a member of the Essex region Society for Evidence Based Policing and the Essex Civilian and Military Partnership Board. For other completed projects she was on Barnardo’s Expert Steering Group for their Veterans in Custody Scheme and a member of the veteran specific CJS group, the Cobseo CJS cluster.