Sue gives an inspiring account of leadership in the voluntary sector

Prominent charity fundraiser Sue Farrington Smith MBE was the keynote speaker at the annual conference of the Centre for Voluntary Sector Leadership (CVSL).

The Chief Executive of Milton Keynes-based Brain Tumour Research, who helped form the charity a decade ago, spoke passionately about her life and career to illustrate inspired leadership in front of representatives from local, regional and national organisations on campus in Milton Keynes on Tuesday 9 July.

Sue has been campaigning to raise awareness and funds since 2001 when the loss of her seven-year-old niece with a brain tumour prompted the ‘Ali’s Dream’ charity. She was then the catalyst in 2009 for multiple charities coming together to launch Brain Tumour Research.

Brain Tumour Research’s growth in the following decade has been startling – raising ‘just’ £6,000 in the year ending 2009, compared to £3.4 million in fundraising in 2018, and from a handful of initial volunteers to 38 staff at present – with continuous improvement at the forefront of what they do. 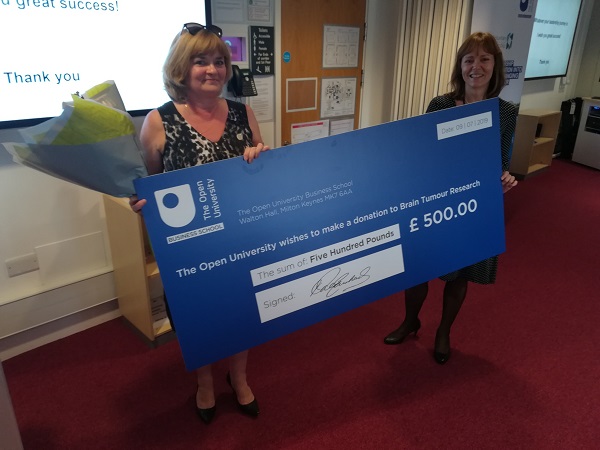 Sue Farrington Smith MBE receives a £500 donation for her Brain Tumour Research charity from Professor Siv Vangen, on behalf of the OU.

Sue was joined by academics from The Open University Business School at the conference, part of the larger Festival of Business and Law to mark the OU’s 50th birthday celebrations, called Collaboration and leadership: making it happen. These sentiments were echoed by Professor Siv Vangen, the Centre’s Founding Director and current Chair, who said the Centre had “no fixed definition of leadership” and that leadership can refer simply to “making something happen”.

The Centre, which launched in October 2016 with support from alumnus and investor Anthony Nutt, recently produced its third open educational resource (OER), ‘Involving Volunteers’, in collaboration with Volunteer Scotland.

Centre Director Dr James Rees, who is leaving the OU at the end of July with Dr Carol Jacklin-Jarvis taking over the role, said: “We’re proud of the free online open and flexible courses we’ve produced in the last three years which have been accessed thousands of times, together with our sustained engagement with the voluntary sector, our various research outputs and the work of our talented research students. The Centre is now taking stock after these first three years and looking to the future and what we want to do.”

Carol and Visiting Fellow Dr Fidèle Mutwarasibo also presented on two projects to support and enhance leadership in the voluntary sector – a Milton Keynes Local Learning Club pilot scheme, and a Leadership Learning Club with the Children’s Society. There are plans for future collaboration with Willen Hospice, UK Community Foundations, and Yorkshire First (based in North Yorkshire).

Four PhD students – Akash Puranik (on informal collaborations), Daniel Haslam (voluntary sector with the NHS), Lindsay Wilson-Jones (governance and leadership on boards, using Riding for the Disabled as an example), and Cristina Mititelu (social value in commissioning and procurement) – then showcased their research and took a range of questions.

There was some further audience participation when a trio of questions were posed:

Gamiel Yafai, a Managing Director who is also a volunteer trustee of The Parks Trust, was an invited speaker to discuss the third point, particularly with Milton Keynes having such a large diverse population. After some interesting feedback was offered, which will be collated and shared with attendees, there was a final opportunity to network.

Read the remarkable leadership story of Sue Farrington Smith MBE in her own words.