There is no question in my mind that the whole process of achieving Chartered Manager status would have been much more difficult without the OU’s Professional Diploma in Management. 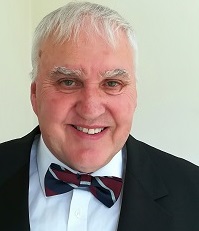 He became a Fellow of the Chartered Management Institute (CMI) in 2016 and following a lengthy written submission and one-hour telephone interview, he was awarded Chartered Manager status two years later. This saw him draw heavily on The Open University’s Professional Diploma in Management, completed in 2007 during his time at the British Embassy in Dublin, to satisfy the academic criteria.

Now 70 and retired since December 2013, Pete says: “I constantly urge people to study with the OU because of the quality of the material and tutoring, and especially the flexibility of studies. There is no question in my mind that the whole process of achieving Chartered Manager status would have been much more difficult without the OU’s Professional Diploma in Management.”

Pete had joined the RAF as a teenager in the late 1960s and served in the UK, Middle East, Near East and Germany for the next 12 years, specialising in telecommunications. He then ran his own business for much of the following decade or so before earning a first-class honours degree in Technical Communications at Coventry University, and then returning to work.

A complete change of career in 1995 saw him hold junior and senior management positions in IT recruitment. For the next six years, he gained significant experience in business development as his main responsibility was generating business from the major multinationals in Ireland and across Europe, before unfortunately being made redundant.

Then working as a Trade and Investment Advisor at the British Embassy in Dublin – assisting UK companies to export to Ireland, and Irish companies to set up a business in the UK – he dealt with senior management in the public and private sectors before retiring in December 2013.

Still working unpaid in the voluntary sector, he now manages the Community First Responders team (which he set up in 2017) and is the publicity officer for the Tidy Towns Committee (an environmental group dedicated to maintaining a clean and pleasant local environment).

Pete has belonged to the RAF Association (RAFA), a charity of 72,000 members dedicated to the welfare of RAF serving members and veterans worldwide, for more than two decades. He served as Chairman of the Republic of Ireland Branch from 2011-18, introducing and implementing numerous award-winning major changes and improvements. This included managing the team which organised and ran the successful RAFA European Area Conference 2017, the largest and most prestigious event for any RAFA branch to host. He has been an elected member of the RAFA European Area Council, which represents 12 branches across Europe, since 2015 with special responsibility for welfare.

He adds: “I mostly used the management experiences gained in my RAFA work to satisfy the experiential criteria to achieve my Chartered Manager status.”