Heather Henry has been named as a top nurse leader by a London-based charity, the Foundation of Nursing Services.

The MBA alumna received the Sue Pembrey Award, named after one of the UK’s outstanding nursing leaders of the late 20th century, which recognises excellence in nurse leadership. Heather is an independent public health nurse based in Sale in Greater Manchester. 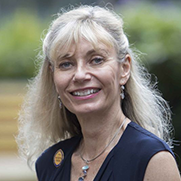 I’m very humbled to receive this award and I want to thank the family and friends of Sue and the Foundation of Nursing Services for giving me this opportunity to highlight my work. Sue was a pioneer of person-centred care and I hope that I can continue that tradition now in my work, partnering and innovating with communities experiencing deep disadvantage and social injustice, in order to improve wellbeing. I want to dedicate this award to the communities I work with and in particular to the fathers, children and mothers of Salford, from whom I have learnt so much about how to tackle inequality.

The judges described her as “outstanding, a true pioneer, highly innovative and passionate. Heather is working as a social entrepreneur and innovator to empower and give voice to and connect disadvantaged communities with the resources to help themselves – through connecting with others”.

Heather has embraced the challenge of bringing about change for individuals and families in the current climate, adopting 21st century devices to overcome the lack of financial resources. Her projects include one to improve the relationship between fathers and their children, enhancing the paternal role in childcare and stabilising the family in order that it can resolve more of its own problems. Another is a choir for children with asthma. She harnesses the hidden abilities in the local community: inspiring, motivating, leading, supporting and finally handing over control to the families that were involved.

She won the Alumna of the Year Award in 2016, as voted for by her fellow alumni, for an ‘outstanding contribution to society’. Speaking of her time at the OU, Heather said: “I started out wanting to impress others and ended up impressing myself. I now urge local people I work with to consider studying at the OU – one of the greatest innovations ever!”

Heather, who started her nurse training at Manchester Royal Infirmary, was awarded the honorary title of ‘Queen’s Nurse’ in 2013 by the Queen’s Nursing Institute which recognises quality in community nursing. She was also named as one of 70 health and care top stars earlier this year on the anniversary of the 70th birthday of the NHS.

Having had asthma since childhood, Heather is currently working on her new programme, BreathChamps, in Little Hulton, Morecambe and Hyde. She is creating ‘asthma parties’ with local people and professionals to help whole communities learn about children’s asthma using fun and memorable songs, stories, games and crafts.