The Open University Business School (OUBS) celebrated its highest achieving students and the alumni who have made an outstanding contribution to an organisation or to society at its annual awards ceremony in Milton Keynes on Thursday 28 June 2018.

The annual OUBS Student and Alumni Awards celebrate the exceptional achievements of the School’s high-calibre students and alumni.

The Awards commend the highest achieving students from the previous academic year, as well as alumni who have made an outstanding contribution to an organisation or to society, as voted for by their fellow alumni.

This year’s student winners were selected from thousands of candidates in dozens of countries. They were congratulated by Professor Mark Fenton-O’Creevy, Associate Dean for External Engagement, at the OU’s Walton Hall campus.

It’s a real privilege to meet so many of our talented students and alumni, and to celebrate their achievements and success. The winning students have all distinguished themselves as the highest achievers in their qualification and fields with a real determination to succeed. I wish all the winners my warmest congratulations on their achievements and every success in the future. 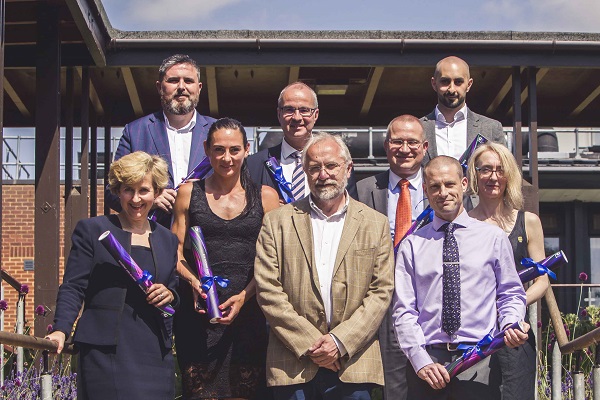 MBA Student of the Year is Gillian Hannon who graduated at the top of her class with a distinction with her dissertation focused on the theme of using politics to move beyond inertia in the corporate world. She negotiates complex licensing deals in emerging markets in her current role as a senior licensing manager for a world-leading semi-conductor company. This requires stamina as does her long distance running, while she is also a member of the OUBS Alumni Council.

The BA (Hons) in Business Studies Student of the Year is Sarah Heilpern who chose the OU in 2011 when she was looking to further her accounting studies. This was due to its reputation of being supportive within a distance learning framework and the flexibility offered to enable her to work during the day. Since she began studying, Sarah has worked in a variety of roles and is now a bookkeeper for Nesher Ltd, an international online jewellery business based in North Manchester. Sarah aspires to take her accounting further following the award of a BA (Hons) in Business Studies with specialism in Accounting.

The MSc Human Resource Management Student of the Year is Jo Jacobs who has worked in education for over 20 years focusing on work-based learning, apprenticeships and employability. She now works for a training provider in London, looking after commercial learning, development and finance. Since starting her MSc, Jo has become an Associate Lecturer for the OU, teaching an introduction to business and management which is ‘a source of considerable pride’. She is also studying a postgraduate module in online and distance education.

The BA (Hons) in Leadership & Management Student of the Year is Alexander Jelley who joined the Army in 1992 before leaving military service eight years later. He has since worked for multiple IT companies in and around London. After being promoted to a project management position in 2010, he was encouraged to undertake the degree level training required for him to be eligible for future management responsibility. He began his degree with OUBS in May 2012, completing it five years later when he was then in a management position.

Professional Certificate in Accounting Student of the Year is Marnie Nicks who began studying with the OU when her son started school. She saw the opportunity to pursue her educational interest alongside being a stay-at-home mum. With a passion for learning and continued professional development, her studies allowed her to start her own business as a bookkeeper with the flexibility to do it from home.

Professional Certificate in Management Student of the Year is Daniel Walsh, a Chartered Manager with the Chartered Management Institute (CMI), who is a Commercial Manager for Stapleton’s Tyre Services, a subsidiary of European Tyre Enterprises Limited (ETEL). Leaving a background in accounting, Daniel’s career change was motivated by a keen interest in operations and he is now responsible for the commercial viability of some 40% of tyres bought and sold in the UK market. He is also in the second stage of his MBA with the OU which he is due to complete in 2019.

Faye Banks received the honour of Alumni of the Year for challenging the perception of women in engineering. She has earned a Bachelor’s Degree in Engineering, MSc in Technology Management Engineering and an MBA from the OU. Studying while working facilitated her life-changing career move from an apprentice to a highly qualified and decorated engineer. In 2004, Faye was named UK Young Woman Engineer of the Year, she won a National Higher Educational Gold Award a year later, and became the Institution of Engineering and Technology’s (IET) youngest Fellow in 2015. In 2016, Faye was named in The Telegraph’s Top 50 UK Female Engineers. The Director of Energy for Costain and Senior Engineering Consultant and Delivery Lead for Enzen Global Ltd, she has worked alongside the BBC and OU to produce a number of STEM documentaries.

Highly Commended Alumni of the Year

Eirian David: An ACA chartered accountant with 15 years’ experience, she has worked in a variety of multinational financial roles including five years in external audit and is currently EPMO Group Leader for BD, a global medical technology company. Her MBA contributed to her success as project lead on a finance transformation project.

David Ferbrache: With more than 30 years’ experience in information security and cyber security issues, David has been at the forefront of developing our national response to cyber security and is currently the Chief Technology Officer for cyber at KPMG UK. The MBA alumnus was awarded an OBE in 2002 for his services to national security post 9-11.

Tillmann Henssler: A Sourcing Manager for Pfizer, Tillmann has been able to promote change in his workplace for the benefit of people with disabilities through skills developed on the MBA. This includes supporting the workplace integration management programme and assisting colleagues to return to work after a long-term illness or an accident.

Dr Clyde Hutchinson: The leader of Propeller Shannon, an international aviation, aerospace and travel tech start-up programme, Clyde is also the co-founder of Junction Therapeutics, a revolutionary new treatment for neurological conditions such as brain cancer and Alzheimer’s. Clyde was selected as one of the ‘Top 100 in Tech’ by the Business & Finance magazine earlier this year.

Christian Kastner: The Europe Sales Director for VAUTID, a German SME in the manufacturing of machinery components and a pioneer and market leader in wear protection for major industries such as mining, cement and steel for more than 70 years. His role is instrumental in selling machinery and mechanical engineering products, entering new markets and developing products with local partners. The MBA alumnus is a mentor on the OUBS careers mentoring programme where he provides career support to fellow alumni.